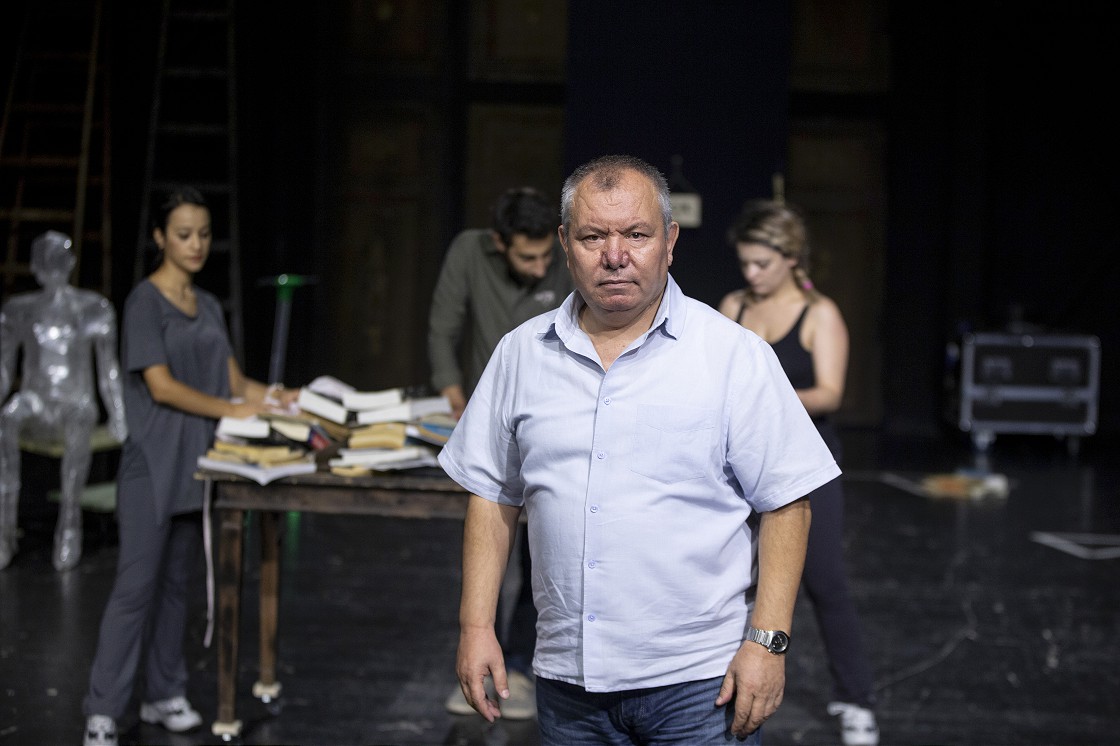 State Theatres have prepared their stages for the season with utmost Covid-19 measures.

Mr. Mustafa Kurt, the General Director of State Theatres, stated "We have equipped our halls with thermometer, mask and sanitizers. We have designed a seating pattern of one seat occupied one seat empty. Audience will not be allowed into the halls without mask and temperature control first.”

In an interview he gave to the reporter of AA News Agency during the rehearsal of Sonsuzluk Kitabevi Eternity Bookstore) which will be premiered on 8 September 2020 in Studio Stage,  the General Director of State Theatres Mr. Mustafa Kurt made some explanations on the new season.

Pointing out the Truck Theatre and Open-Air Theatre plays the State Theatres performed and the high number of children they accessed in the Southeaster part of Turkey, Mr Kurt reported that they did not deprive the audience from art in summer months

"We will open the State Theatre’ halls in all regions”

Mr. Kurt made the following expression:

“We did not sit around during the pandemics. Seventeen new plays will be premiered. This is really significant. Taking required measures, we have worked hard with our artists. In this parallel, we will open some small halls with insufficient ventilation later on. However, remaining halls of the State Theatres in each region of Turkey will be opened.”

After explaining that “We will stage the plays of the last year’s repertoire, which still attracted the audience, starting from September and October” Mr. Kurt added “ Other halls will also be opened in parallel with the normalization steps.”

Stating that the plays would go on tour later, Mr. Kurt stated the following:

"We have made all preparations. Tickets are currently on sale. I believe that the audience will show interest in our plays in September and October, as they have done in the summer. We have taken all measures foreseen by the government. Our halls are equipped with thermometers, masks and sanitizers. Our seating pattern will allow one seat to be occupied and one seat to be empty. Audience will not be allowed into any of our halls without mask and temperature control first. Social distancing marks and warnings are placed in our canteens, toilets and foyer areas. We have taken any measure to protect the health of our artists and the audience. I think it is going to be a good season. I do hope that we will overcome this process with health and without any harm to anybody. "

Aşık Veysel is at the theatre stage

Stating that cleaning and disinfection procedures are repeated every day in each hall, Kurt added hall ventilations are cleaned and checked regularly as well.

Kurt underlined that firstly Cüneyt Gökçer, Studio Stage, Akun Stage and Küçük Theatre  will be opened in Ankara and informed that Cüneyt Gökçer will start the season with “Leyla ile Mecnun (Layla and Majnun)”.

Underlying the importance they attach to the plays of the national playwriters, Mr. Kurt stated that on 1 September 2020 they will meet the audience with the play named "Aşık Veysel (Ashik Veysel)" which will be staged for the first time.

Kurt said that Sonsuzluk Kitapevi (Eternity Bookstore) play written by Sabahattin Kudret Aksal, a national playwriter, will be premiered on 8 September 2020 and informed that “Açık Denizde (Out at Sea)” and “Siyahlı Kadın (The Women in Black)” plays which were staged last season will be offered by Akün Stage to the audience.

"New plays will meet with the audience in our regional theatres.  Firstly, 17 new plays will be premiered. For example, “ Tarla Kuşuydu Juliet (Oh, Oh, Juliet!) ” is going to be displayed in Bursa State Theatre, Yastık Adam (The Pillowman) in Antalya State Theatre and Aşk Bir Şey Değildir (Love Is Not A Thing) in Trabzon State Theatre. We have new plays to be staged in İzmir State Theatre. We even have a Turkish musical named “Yıldızların Altında” (Under the Stars) to be performed in September in open space. We are doing works which will be admired by the audience. We have many plays to stage. There are many new plays to be performed in  Van and Diyarbakır. Ticket sales continue at the box offices which are equipped with protective glass and where social distance measure is obeyed. We perform at fifty percent capacity.  Spouses can sit side by side as long as they have no health problem. "

Sonsuzluk Kitapevi (Eternity Bookstore) is on the stage after 50 years.

General Director Mr. Kurt stated that they make preparations to re-put on the stage the play “Sonsuzluk Kitapevi” which was staged approximately 50 years ago and added that:

“It will be premiered on 8 September 2020. It tells the story of a man who sends the immortal pieces of art of the important authors to his acquaintances, spouses, friends and other people in his search for immortality . We are working on it for quite a long time. It is a dynamic and a new play. "

Kurt stated that they are working on the play’s premier together with the young casting, Musician Mr. Can Atilla on the music of the play, with the head set designer and previous art technical director Mr. Hakan Dündar on set design, with Funda Karasaç on costumes, with the head choreographer of State Theatres Mr. Volkan Ersoy on dances .